In this Japanese animated film, Sea Prince and Fire Child are two youngsters in love who flee from their disapproving parents into a world filled with risks and adventure.

Gods once lived on earth, and two siblings, Oceanus – God of Water, and Hyperia – Goddess of Fire, lived in peace and dearly loved each other. However, the God of Wind, Algaroc, become jealous of the pair’s happiness, and spread lies and deceit between them until their hatred for each other brought about war. Finally, Algaroc was imprisoned by the King of Gods, but after that time, the brother and sister still despised each other, so the Children of Fire and Water forever remained apart. But, then Prince Syrius of the Water and Princess Malta of the Fire meet and fall in love. The love of Syrius and Malta may not be enough to surpass their parents’ hatred. Whether they can stay together forever may be impossible[Source Themoviedb, Myanimelist] 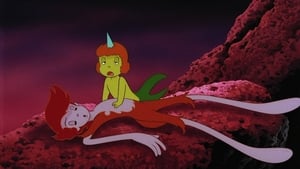 Grave of the Fireflies (Dub)