A daringly original story of love passed down through generations.Jun. 16, 2018Japan98 Min.PG
Your rating: 0
6 1 vote

The movie follows a 4-year old boy who is struggling to cope with the arrival of a little sister in the family until things turn magical. A mysterious garden in the backyard of the boy’s home becomes a gateway allowing the child to travel back in time and encounter his mother as a little girl and his great-grandfather as a young man. These fantasy-filled adventures allow the child to change his perspective and help him become the big brother he was meant to be.

When four-year-old Kun meets his new baby sister, his world is turned upside down. Named Mirai (meaning “future”), the baby quickly wins the hearts of Kun’s entire family. As his mother returns to work, and his father struggles to run the household, Kun becomes increasingly jealous of baby Mirai… until one day he storms off into the garden, where he encounters strange guests from the past and future—including his sister Mirai, as a teenager. Together, Kun and teenage Mirai go on a journey through time and space, uncovering their family’s incredible story. But why did Mirai come from the future?[Source Themoviedb, Myanimelist] 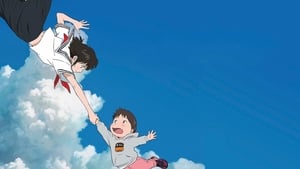